There is a new female identity emerging in American pop culture. She attends all the local Zumba™ classes, drinks Pumpkin Spice Lattes from Starbucks, and lives vicariously through “Sex and the City” reruns, all while wearing her leggings as pants. She shares all unoriginal interests and characteristics of her best friends. She is, according to mainstream society, the “basic b**ch.”

Urban Dictionary, the online cultural dictionary, defines basic as, “… someone devoid of defining characteristics that might make a person interesting, extraordinary, or just simply worth devoting time or attention to.”

A simple Google search will equip one fully with, well, the basics. Blogs define the term, BuzzFeed entices readers with quizzes to implore their own basic qualities, and Cosmopolitan encourages full identity conformity with articles addressing, “The Best Things About Basic B**ches.” Accompanied with the humor and slight truths common to all stereotypes, the Basic B**ch identity’s sweeping coverage proves difficult to escape. The following are a few simple alternatives to being a basic that aim to relieve the pressure on females today. Isn’t it time to stop being basic and start being individuals free of inhibitions? It’s as simple as that.

Basic: Dressing as a sexy             for Halloween
A primary showcasing of basic b**ches undeniably occurs at the end of October. As early as high school, basics all around sip their Pumpkin Spice Lattes and brainstorm their Halloween costumes- the more sex appeal, the better. Around this time of the year, one sees the irony of unoriginal creativity that underlies all of the artificial hair and facial products. Sexy nurse, sexy police officer, sexy… lobster?

Simple:
It may seem difficult to escape the conundrum. The matter at hand becomes whether to partake in spooky festivities the way the society expects, or feeling confident meeting a new partner in a non-sexualized costume. The simple female’s solution: dressing however one wants, regardless of sexual appeal. There are many resources to finding alternative, non-sexualized costumes.

Sure, a silent film actress may not be loud enough to capture the attention of the male in the SWAT Team gear, but sparing oneself wasted time with a partner whose primary interest is superficial physicality has its rewards- more airtime for a non-basic partner. Plus, one has more opportunity and accessibility to tear up the dance floor without tearing the little fabric covering the body. Of course, if a sexy lobster is one’s true spirit animal Halloween costume, that’s allowed too.

Basic: Selfie Taking
Paralleling the basic b**ch identity, the masses have undertaken the selfie as their primary means of self-definition. Social media platforms of all kinds are teeming with kissy faces and staged bathroom pictures alike.

Simple:
This alternative is a little less posed and a lot more generous. Instead of taking a selfie, the simple girl’s alternative is to take pictures of others. Whether it’s of friends, family or strangers, everyone benefits. Focusing the lens to the outside world allows for the capture of genuine moments rather than staged ideals. The photo blog, Humans of New York, is a predominant example. Ironically, if everyone is taking pictures of others instead, one is still bound to get a great new Facebook default picture. Perhaps this alternative’s most appealing aspect- the new default picture will get even more “likes” because someone caught in their natural, unsuspecting existence is much more beautiful than posing in the bathroom mirror with a kissy face. 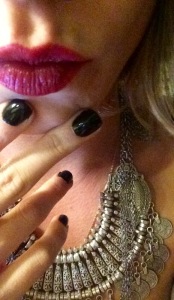 Basic: Excessive use of artificial beauty products
Too often, women and girls are forgetting to leave the house without an overdose of makeup, hair spray and artificially bronzed skin. The beauty industry is booming, and girls are beginning to partake in it at increasingly younger ages. Women spend over $426 billion a year on beauty products and the average woman spends nearly an hour daily primping herself- time that amounts to 2 weeks per year, according to surveys conducted by The Huffington Post and NBC, respectively. Besides the alarmingly high costs of the beauty industry, the obsession over appearance can lead to mental health problems like depression, anxiety and eating disorders- what’s so simple about that?

Simple:
A simpler approach: ditching the foundation and applying a smile and a confident aura. These accessories match one’s natural pigmentation unfailingly and always make the eyes pop. This simple alternative may not be the easiest lifestyle change, but it outweighs the opportunity costs of participating in an industry that profits off one’s low self-worth. BuzzFeed staff writer, Erin La Rosa, shares her experience in an article about not wearing makeup for a week. Though she admits discomfort at first, she discovered she was more approachable, accepting of her flaws and respectful of the courageous women who renounce the artificial products every day.

Basic: Living vicariously through reality TV, or other drama-inducing programs
One notable quality of a basic is their zeal for reality TV and dramatized programs as a whole. Including, but not limited to: “Keeping Up With the Kardashians”, “Real Housewives of [various locations]”, “Real Divas of [various locations]”, “Glee”, Lifetime movies, Oxygen Network movies, “The Bachelor” and “The Bachelorette”, it is a miracle these individuals make it out of the house into actual reality to express their newly acquired TV-based characteristics.

Simple:
Acknowledge the difference between reality TV and reality. According to a 2013 study published in the Psychology of Popular Media Culture, exposure to reality TV negatively affects viewers’ perceptions of the world, including increased acceptance of catty behavior and backstabbing. A survey by The Today Show says reality TV viewers are more neurotic and claim to have a lower self-esteem. Simply put, reality TV and other drama-inducing programs offer more drawbacks than benefits. Going out and living one’s own life is much more simple than the time and energy it takes to mirror a star- a star who is only “acting” like their real self to begin with.

Basic: Calling other females basic
Lastly, one of the most degrading characteristics of the basic identity is in fact, labeling other females as basic. Perhaps it does feel good to dress up and apply some mascara every once in a while, and it’s possible that a hot, pumpkin flavored beverage is the perfect accomplice on a chilly autumn day. Can an individual be simply and accurately defined by their comparability to culturally determined standards- or by anything for that matter?

Simple:
The paradoxical solution may be that the only way to accurately comprehend an individual is in realizing the absurdity of attempting to do so. Isn’t this, after all, humanity’s defining challenge? Accepting that there is no universal way to define a person is one of the simplest challenges there is.

The female’s ultimate challenge to the basic identity is uniting under the practice of individuality, not a homogenous cultural category. Instead of embracing the trending interests, partake in a declaration that will never go out of style- being one’s true self. Conserve time, money and energy and live simply. Embrace the innate, uncanny qualities within and encourage others to do the same. The first step may just be taking a minute to appreciate the inspirational quotes that flood Pinterest. As nonconformist icon Maya Angelou stated simply,

“If you are always trying to be normal, you will never know how amazing you can be.”

The original article was written by Olivia Morrissey in October 2014 and has since been revised. She loves pumpkin-flavored-anything and leggings as much as the next individual.