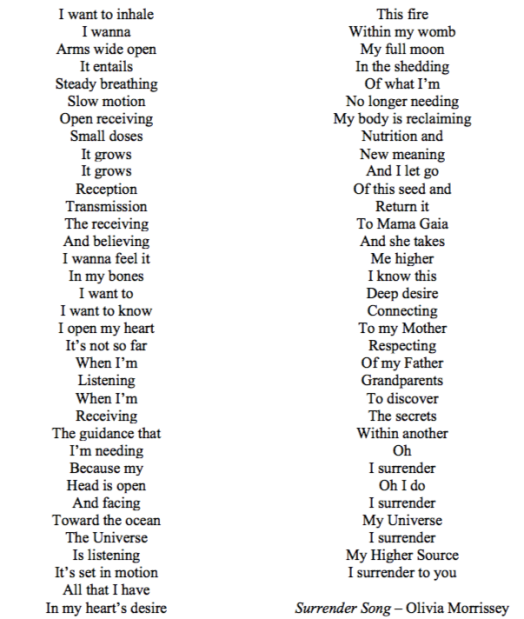 My good ol’ only-ever jam partner Jordan Serra and I performed our third ever singing open mic concert series back in Rhode Island last week. We’ve messed around holding “band practice” in his basement studio for about an hour or so before each performance, and more than anything we’re just having fun– Jordan more so than myself in our first few performances, where I held way too much pressure on myself to even enjoy in the slightest something that my soul deeply loves.

It’s about the one year anniversary of facing my open mic singing-in-public fears, and the evolution of my voice, confidence, intuition and ability to open and exercise my throat chakra is due solely to my newfound self-loving practices. My active self-healing and loving journey this year has transformed my life in every single way, and I believe that was evident beneath the spotlight at Perks and Corks that evening.

Our blast of an experience and the renouncing of my perfectionist standards was only exemplified by my excellent support team of friends who came to watch and my stage partner, who always emphasizes the fun factor behind a solid jam sesh.

Thank you all who have continued to support my feeling, healing and revealing, and I can only hope that these videos inspire you to get after something that makes your soul sing, too. Also, go give yourself a huge love-hug. Because you are magnificent. XO

A Jordan and Olivia Experience’s cover of Aaliyah’s ‘Are You That Somebody,’ last year (November 2016).

For more giggles and listening (including me trying to multi-task singing Beyoncé and tapping a tambourine, check out the YouTube channel. More than anything though, smile and have a little fun 🙂

From our nation’s capital, we headed south to Music City: the capital of songwriting and country music.

Hello, flashing lights, buy-one-get-two cowgirl boots, home of hot chicken and the Man in Black. Nashville, the first official stop as co-pilots on our cross-country adventure, was only slightly warmer in temperature than D.C., but lightyears warmer in southern hospitality. We saw sun here for the first time in weeks, and light shone on the incredibly kind friends who hosted and welcomed us with homemade beer and great taste in music, and the equally friendly strangers who shared locals-only city tips and histories.

City tip: Head to East Nashville for a more hip, locals scene. Visit Drifters and sit at the bar for some good stories and even better BBQ!

It was a taste of the south, a taste of aforementioned hot chicken, which is absolutely no joke and caused my road trip partner to shed (or sweat?) a single tear of fiery deliciousness, a taste of a Bushwacker, a very boozy adult milkshake originating from the Caribbean and milking its way up the U.S. east coast, and a taste of rich entertainment industry history. 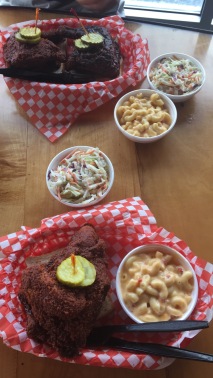 The famous Hattie B’s hot chicken was to die for! A side of coleslaw helps cool the palette. 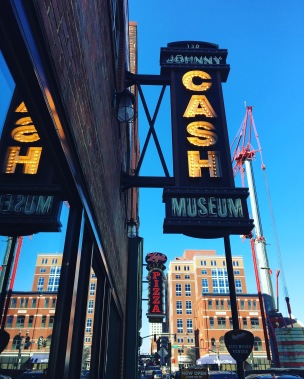 Our daytime activities consisted of seeing the Johnny Cash Museum, visiting Acme Radio and hiking in Percy Warner Park, while our nightlife involved strolling down Broadway, with its Honky Tonk music pouring from every bar, a Country Burlesque show at Skull’s in funky Printer’s Alley, and karaoke and mechanical bull riding at Wild Beaver.

City tip: Musician’s etiquette asks for a dollar in the performer’s jar upon entry to a bar. Consider it a thanks-for-getting-up-there-and-making-Honky-Tonk-for-us, and a great-job-tip because in Nashville, every performer is talented enough to win on The Voice (we met one who actually had).

City tip: In the 1960s, Nashville’s early years in becoming the booming country capital it is today, musicians would perform at the Ryman Auditorium and head over through the alley entrance of Tootsie’s Orchid Lounge for a night-cap. To this day, the bar brings in performers and tourists alike.

All in all, Nashville was pleasing to the senses: great music for the ears, delectable treats for the tastebuds, intriguing history and sight-seeing for the mind and the eyes, and twangy charm for the heart. It was a city recognizable to this day for its role in shaping the country music genre and proclaiming itself as a place of hopeful and determined musicians and songwriters with aspirations of making it big time.

When sitting at Drifters’ bar chatting with a local, I asked, “Are you a musician?”

I caught myself instantly rephrasing my question in response to his jaded chuckle- “Is everyone a musician here?”

Check out the adrenaline rush below that was post-mechanical-bull-ride: my karaoke version of ‘He Can Only Hold Her’ by Amy Winehouse at Wild Beaver in Nashville!

The legendary, soulful sound of Amy Winehouse first delighted the world on this day, September 14, in 1983. She would have been 33 years old today.

My appreciation for Amy’s work began at a young age and stemmed from my magical, fiery Auntie Denise who lived in Switzerland.

While other kids grew up listening to their parents’ old Beatles CD’s, I would spend summers reading Harry Potter in the backseat listening to ‘Back To Black’ with my mother and my visiting auntie.

Like many of her fans, I credit Amy Winehouse for my fondness of jazz, r&b and soul music– but I also credit her for being a lyrical and vocal role model in finding my own voice.

To me, Amy is a legacy of passion, feminine empowerment, deep-rooted pain and emptiness, and then, manifesting one’s own identity and truth. She was a torn, beautiful being who exuded emotion and talent. But then again, aren’t we all?

From shower sessions and solo car rides to the 8th grade talent show and humming at work, singing became the simplest and most soothing practice for my throat chakra to find it’s use. Sometimes they were my own words, sometimes they were Amy’s, or Frank Sinatra’s, or Taylor Swift’s. But every time, a heaviness deep inside of me found release.

So as this summer draws to a beautiful close, and New England weather reminds me just how sweet and sunny September can be, I knew I had some things to say in achieving my final goal of the hot season: singing at an open mic night.

This past Monday night, I gathered with support from some dear, clear-eyed, independent queens at Perks and Corks in Westerly. We got martinis, grilled cheeses and girl time, and I got excitedly nervous. I was the last performer to go.

It was a small crowd, but seeing my friends (when I actually opened my eyes) and hearing the strength and feeling in my own voice as I got comfortable under the light was all that I needed.

At the end of the first song, the event manager gave me a verbal pat on the back. I hardly remember saying, “can I go again?!”, like a child on an amusement park ride, but he granted my wish.

Exposing my vulnerable voice and emotions to the outside world was the right kind of terrifying. Allowing myself to share my secret passion with the world was an act of self-love. Holding myself accountable to this fear-facing goal was a form of self-care, and great practice in putting myself first.

It was listening to my very soul, the essences of me that were screaming to be let out, and acknowledging that I deserve to be heard, in the way that each of us do. And in doing so I felt that same rush of adrenaline that I got from skydiving, and the best high I could ever feel in this life.

I’m no professional, but singing is something that I absolutely love to do. I’ll leave the rest to the videos. Thank you to all of my family and friends who have shown endless love and support!

‘I Heard Love Is Blind,’ by Amy Winehouse.