If I were to openly express a stereotype I’m working to overcome (in all of its unrighteousness), I would do it here for the purpose of this blog post and it would be about Mondays, in that they are typically and destined to be long, dull and gray. Thus was the case this week.

As expected of an all-inclusive Monday, a few things had gone not-so-ideally and I was fighting a case of the grumps by the time 5:30 p.m. had rolled around.

I had finally finished classes for the day and was met with a striking red traffic light, thwarting my timely trek to the library. I joined the crowd of other students waiting to cross the road, making extended (almost to the point of being awkward) eye contact with a fellow trekker before returning to the screen of my cell phone to address the gray-day’s remaining emails.

I was relieved to find this task consumed but few minutes, and I gratefully put my phone away to give my mind a break for the remainder of my stroll. At this point, I had managed to hit yet another red light and I realized I was still walking in sync with the man-bun student I had made eye contact with two lights ago.

“How’s your Monday going?” I asked. It was yet another one of those moments where I was reminded just how much faster my mouth works than my brain.

Unsurprised by a stranger’s grade-C conversation starter, my walking partner responded by telling me that as of this morning, Monday was his new favorite day. Delighted at this response, I inquired why- somewhat desperately- and allowed my mind and ears to unfold, ready to receive the beautiful insight that so often stems from serendipity.

He told me that he had learned the prefix, mon- in Monday, is the French word meaning ‘my’. Monday, to my new friend Nick, now meant ‘my‘ day, and was synonymous with the glorious carpe diem: seize the day.

Did the gray clouds really break at the sharing of this enchanting idea? I don’t know. But I thought about how accomplished I feel after I have a productive Monday, and how it sets the tone for the rest of my week. I thought about past Mondays and how they aren’t really all dull and gray, not when you have the right mindset. I thought about how grateful I was to have met my new friend Nick, and had a mentality-shifting 2-minute conversation with a stranger. But more than anything, I thought about how I can’t wait to make Monday mine next week. 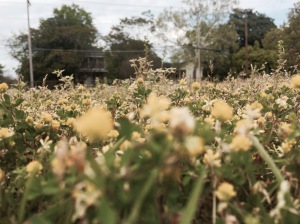 One Reply to “A Break in the Gray”